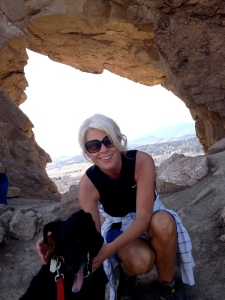 We rescued Cola from the local shelter when she was a puppy.  They said she was the “runt of the litter”. I have to say she stole my heart from the beginning. I never dreamed she would play such a role in my life,  “A little encourager to my soul” would be an understatement in describing her. We lived in MO and I was so sick. I later found out it was Lyme disease I was dealing with. When the family continued in their hustle and bustle, I often found myself in the bed and there would be Cola curled up beside me. She always wanted to be close. I think she sought out the one who needed her most. Me. The fear and loneliness of being sick is difficult.  I had no words. But no words were needed with Cola.

We moved to Colorado when she was a year old. She adjusted just fine even though she was in a small space and didn’t have a lot of running room. As I regained strength, she became my adventure buddy. We’d go down to the river or on a hike. That dog runs up the trail and off trail, but always turns back to see where I am.  She has some kind of stamina mixed into her fierce loyalty.

Her shenanigans (eating the cake(s), getting out and roaming the neighborhood), could be so frustrating, but that also makes me cackle. She has such a fun personality. She loves people and the open places to run and roam.

I’m finding it so difficult to let her go.  Initially, when I came to terms that our lifestyle could not support her, I accepted that maybe someone needed her as much as I did; that her angel duty would need to be administered to someone else. I let David take her to the shelter. They thought she would be adopted quickly.  I wrote a letter to be given to her new home. But here we are several weeks later, and she is still there. My heart hurts knowing that she is still at the shelter needing to be adopted; that I’m not there to love on her. I know all of the reasons on the list of why we had to go this route, but it does nothing to lessen the pain. I know she would never leave me. Maybe that is part of what hurts the most. She has been such a good dog and truly deserves the best.

I never envisioned that I would not be with her until the end of her life. Sometimes bravery hurts.