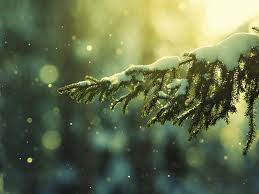 The Blue Spruce Trees are quite stately today.  The snow is settled among their branches.  So beautiful is the contrast of white against the dark, but then the sun suddenly shines upon this serene scene and somehow nature has dressed for the Grammy’s~diamonds appear draped, transforming stately into unearthly elegance.  The wind makes it’s entrance into the room and all at once the air if full of the diamond dust, blowing and swirling; taking the greatest thrill ride into the heavens before taking it’s final ascent to the ground.  Life happens like that, doesn’t it? ~ a beginning, a belonging, an opportunity to let the sun make us shine, a thrill ride before the final rest.  It happens so fast.  One morning we wake to find the snow has melted. The snow had it’s place for such a sliver of time…only a small sliver.